About Our Background Image 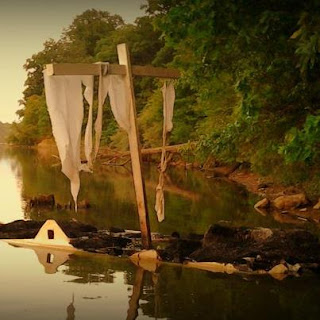 Our background image, which you may not be able to make out very clearly ... is the remnants of a viking funeral.

For most of its almost thirty years, the Cornerstone Festival beckoned our family, and it took us far too long to finally make the pilgrimage. I (Alan) went on my own in 2007, to "check it out" before taking the family in 2010. We had a great time, and were generally planning to go every three years or so as our family vacation. Their motto of "music. art. community. faith." was right up our alley.

The last night of the last Cornerstone, a viking funeral was held. There were a few miscues with flaming arrows, but eventually the boat was set aflame in the middle of the lake, and the festival was officially over.

Posted by Dorkness to Light at 10:48 AM No comments: 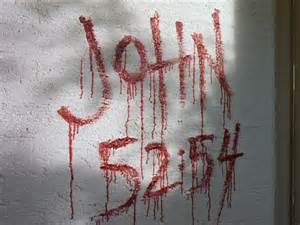 In the X-Files Episode "3" (season 2, episode 7), vampire cult killers leave behind a message in their victim's blood.

Fox Mulder demonstrates his knowledge of Scripture by quoting the verse in full. "He who eats of my flesh and drinks of my blood shall have eternal life. And I will raise him up on the last day." He then makes a crack about "big-haired preachers" and their feeble literal grasp of the Bible.

One problem. The verse doesn't exist. What he quotes is in fact John 6:54, although the wording did not precisely match any popular English translation that I could find.

I'm not going to hypothesize on why the episode's writers decided to make up a Bible reference instead of using an actual one. But whatever the reason for referring to the words of John 6:54 as John 52:54, it stands out as a choice that is ... just weird.

Yes, this was in the long ago days before Google and Bible Gateway made looking up verses really easy. But still ... aren't there fact-checkers in the organization somewhere? And the cynic of course wonders why nobody in the ENTIRE production crew noticed the mistake.

Again, they get Jesus' words correct, which I appreciate. They didn't make up words and put them in the Bible. But they made up the place in the Bible where those words are found. 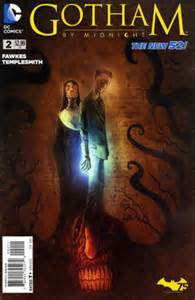 We pick up where issue #1 left off, with poor Internal Affairs Agent Rook learning that “Precinct 13” really does handle the hard cases. During his first supernatural case in Slaughter Swamp, he reveals exactly where his head is at:

Fortunately, Detective Jim Corrigan is on hand to handle the witchy apparition of a creepy nun-like being. He’s freaked out, and realizes that he doesn’t have a lot of time. “The Spectre is almost here.” He is able to subdue the entity and free the children she was holding. But they are speaking the same gibberish language that the Attwood children are speaking.

Back in Gotham Heights, Sister Justine realizes that something terrible has been done to the Attwood children. In a flashback we learn how she met Detective Corrigan and his alter ego, and how she became part of the Midnight Shift.

Sister Justine recognizes five of the gibberish words as names. She’s heard them before. By the end of the issue, Corrigan sums up where we are and where we are going:

“Something big and bad is moving into Gotham. Something that’s either got five names or five bodies. Or both.”

Again, it’s hard to think a better artist that Ben Templesmith to introduce readers to the eerie weirdness of this title. Not only the supernatural apparitions themselves, but the human’s reactions to the apparitions are suitable creepy.

Sister Justine is the featured character in this issue. The idea that the Spectre saved her once both gives insight into her past, as well as asks questions about the Spectre’s relationship with Corrigan. Justine’s word bubbles are smaller than the others’, indicating that she is meek, perhaps still traumatized by her past. But Corrigan realized he needed her on the team, and that in itself is an interesting fact.

I like the fact that the Spectre is staying off the page, at least for now. The idea that what they have faced SO FAR is not worthy of the Spectre’s attention is a bit scary, as it means that something even creepier and more evil is on the way. This is the way that suspense is supposed to work, laying down one puzzle piece after the other.

This issue was slightly slower than the first, as it has to actually develop character, as opposed to just introduce characters. But it was quite a gripping read.
Posted by Dorkness to Light at 7:36 AM 2 comments: