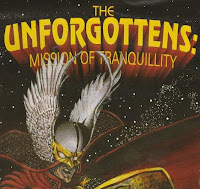 The Unforogttens: Mission of Tranquillity #1, Trinity Comic Ministries, 1993. The untitled story is created by Timothy A. Gagnon.


I think it started with the Frank Peretti novel “This Present Darkness,” and its sequel “Piercing the Darkness.” These were published in 1986 and 1989 respectively. Those books both fed on a growing interest in spiritual warfare in the evangelical church, and also contributed to that growing interest. Many evangelical novels and albums of the era reflected this interest, so a comic book featuring similar content makes sense.
Three teens are performing a Satanist ritual in the woods, and summon a demon. They are interrupted by a warrior of God (called Faith), who appears to be an angel, but is in fact a human who has been empowered by God to fight Satan and other evils. Two of the three teens repent of their ways, the demon is expelled, and Faith meets up with two similar beings. At the end of the issue, an unsuspecting hitchhiker appears to be kidnapped by demonic forces.
There is one scene in particular that surprised me. The lead character is Catholic, and his salvation came as a result of a conversation with a priest, in a confessional. Evangelical publishing is not known for taking ecumenical stances, so this scene stood out in a positive way. It had a simple storyline and overly dramatic dialog, but there were also interesting moments and subtle touches sprinkled throughout. Re-reading more than two decades after first buying it was not the embarrassing experience that I had thought it may have been. 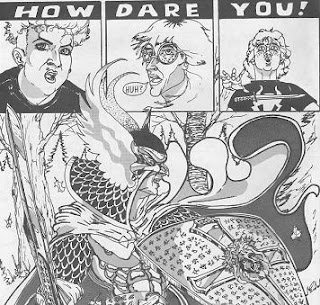 Yes, this is a self-published book, produced by an amateur creator. And some parts of it are definitely “amateurish.” The lettering stands out in a negative way, as does the spelling of the word “tranquility,” and the overall 1990s-ish nature of the art. And the book is a half an inch taller than standard comics means that storing this issue has been a challenge. But despite being crunched for more than two decades in bags and boxes and bookshelves, this issue is in remarkably good condition. The paper quality is surprisingly high, and this 20-year-old issue has not suffered a single tear or a rip.
This black-and-white book contains 30 pages of story, which is at least 5 pages longer than most mainstream stories of the same period. Most comics of his era were priced in the $1.50 - $2.50 range, so this book’s $1.95 cover price was appropriate. There were three more issues of this title published, and they are on the to-be-reviewed list.