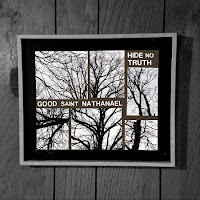 During our Audiofeed episode, we talked about the "Death by 1000 Cuts" seminar that featured musician Nate Allen, in which he discussed the spiritual abuse he had suffered, and his recovery process.

We were pleased to talk with Nate about his news album, "Hide No Truth," which he recorded under the name Good Saint Nathanael, in which he addresses many of those issues. This conversation covers the topic of spiritual abuse, the goods and bads of being raised in the church, the recovery process, and how to identify people who can help. We also talk about the new album, and play portions of two songs.

Click on the player below to listen to the episode:


You may also subscribe to the podcast through Apple Podcasts or the RSS Feed.

We would love to hear from you about this topic, the podcast episode, or monsters in general. Send e-mail feedback to dorknesstolight@gmail.com

You can follow the network on twitter @DorknessToLight or Alan @ProfessorAlan
Posted by Dorkness to Light at 1:36 AM No comments:

On Sunday's upcoming episode #27, we talk with musician Nate Allen (performing as Good Saint Nathanael), about his new album, and the difficult circumstances that led him to produce the album.

Here is the first video from the new album:

And some info about it

About Hide No Truth (photos by Larissa Van Der Vyver)

Near the end of Nate Allen’s first Destroy Nate Allen tour he spray painted the words “My Goal Is Resolution” boldly on his acoustic guitar. The vulnerability and complexity of that statement unknowingly charted a course for his life.

With his new project Good Saint Nathanael, Nate Allen is turning to face his demons leading with a rare-disarming vulnerability. On Hide No Truth (available on Feb. 1st), the harder Nate looks at himself in the mirror, the more humanity reveals its bitter, beautiful complexity. 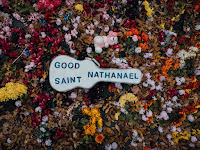 The nine songs on Hide No Truth find Nate stripping back his sonic pallet to reveal stark, memorable, acoustic songs full of detail and intention.

In what is a cathartic move towards self-choice, honest art and emotional health, Nate uses religious language to explore human vulnerability and his own broken Christian religious experience. 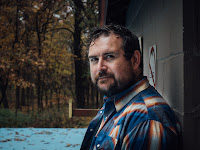 Faced with a choice between ignoring his past or leaving his faith and community, Good Saint Nathanael is a project seeking a 3rd path, one that lances the wounds, protests somberly, and grieves deeply while still refusing to give up.

Hide No Truth was recorded and mixed by Jon Terrey (Listener, The Chariot). Then Nate assigned different friends to add whatever their vision of “noise” was to each track, further adding to the haunting soundscape. Lastly, the record was mastered by Jim Demain at Yes Master Studios (John Prine, Frank Black, June Carter Cash).
Posted by Dorkness to Light at 1:25 PM 1 comment: