"Harry Whodunit: The Mystery of the Nine Samsons"Enjoy your Covid lockdown with this Harry Whodunit mystery audio adventure!Back in Episode 31, we mentioned Harry Whodunit as one of our favorite little-known bits of Evangelical pop culture. 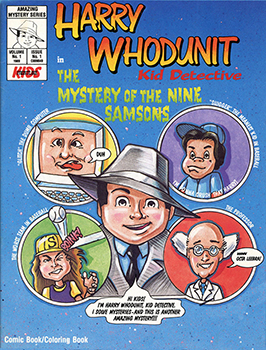 And in Episode 32, we played a digitized version of one of the two cassette sets we own. And then in Episode 36, we played a digitized version of the other set we own.
As we discussed last episode, creator Terry Scott Taylor recently put his entire audio archives up for sale, including the entire (4 adventures) Harry Whodunit collection! We were very excited to see that, and bought the collection.
And here is the third adventure we've posted, although it was the first one produced. And so, we proudly present "The Mystery of the Nine Samsons!"Click on the player below to listen to the episode:
Right-click to download the episode.You may also subscribe to the podcast through Apple Podcasts or the RSS Feed.We would love to hear from you about this topic, or the podcast episode. Send e-mail feedback to dorknesstolight@gmail.com You can follow the network on twitter @DorknessToLight or Alan @ProfessorAlan
Posted by Dorkness to Light at 12:47 AM